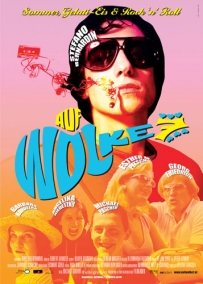 „On Cloud 9" - a shrill (piercing) comedy about three young enamoured couples during a sunny summer at the lake. Uwe, undying in love with the beauty of the village - the full-bosomed Elke - dreams of a career as a singer. He is hoping his songs will yield to Elke´s heart. But Elke loves herself and Tony - muscle man and triathlete - who wants to build a house for Elke. Uwe´s best friend Kevin is in love with Tamara- who on the other hand is nothing for milksops. To demonstrate his toughness, he not only sacrifices his forefinger. However, Uwe does not realize for a long time, that a little cloud is accompanying him in the sky and that there yet is another girl with a personal cloud in the sky.