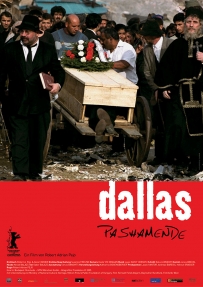 DIRECTED BY
Robert A. Pejo

After his father´s death the teacher Radu returns from Bukarest into his home village to arrange the funeral. The Roma-settlement, consisting of desolate and ram-shackle huts, is situated directly next to a huge apocalyptic dump: there is no water, no electricity, no sanitation. The place and scenery remind of the medieval time during the plague. The inhabitants cynically call it "Dallas".