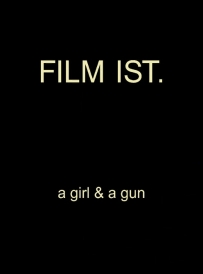 Film Is. A Girl and a Gun

Once upon a time cinema was born of the spirit of fairground attractions, sleight of hand and fireworks (genesis). The world of moving images, glowing deep red (paradeisos), was soon populated by all kinds of rejoicing figures, who jumped, crawled and rolled in groups through forests and over dunes. Later man opened his wall safe to woman with the code word eros; a little finger was kissed tenderly, a violent grab was met with his hand being bitten. The age of masquerades, games of hide and seek, and playacting had begun. The hands of strange men loaded and bent female bodies. Phallic objects injected desire and death (thanatos). After the birth of the (imaginary) round man the preference shifted to seeing bodies in pairs (symposium).