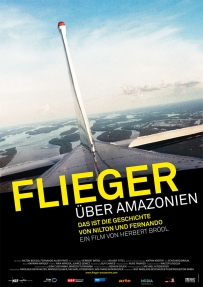 The flyer. His name is Ricardo and he's been in the business for years. His big brother taught him to fly when he was 16. After that he flew every kind of aircraft in use in the Amazon basin, advancing to the top of his line. He has an amphibian Lake Renegade Turbo, a boat that can fly, a plane that can be paddled. It can take off and land on land or water in any desired combination. The ideal means of transportation for this world of jungle and rivers under the Southern Cross.