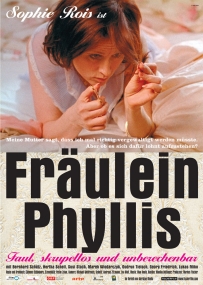 Her mother claims that she could use a good rape. Henry is in shock. Since meeting her, he has lost all control over his life. Everyone else assumes she's just sick: almost 40 years old and still living at home with mother.

This doesn't bother Phyllis at all. When she isn't lying around in bed, she's going full speed. After all, a Volvo is only dangerous for the other drivers, not for the people sitting in one. And she drives right into a catastrophe. Without meaning to, she has turned a third-rate TV actor into a happy hospital patient in a waking coma. Her mother is six feet under, and she's set for life.

An Austrian film about a woman who refuses to leave home, and about how there is nothing in the world better than being able to say: I inherited some money.