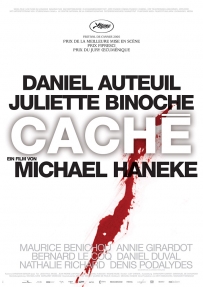 Georges, who hosts a TV literary review, receives packages containing videos of himself with family - shot secretly from the street - and alarming drawings whose meaning is obscure. He has no idea who may be sending them. Gradually, the footage on the tapes becomes more personal, suggesting that the sender has known Georges for some time. Georges feels a sense of menace hanging over him and his family but, as no direct threat has been made, the police refuse to help.