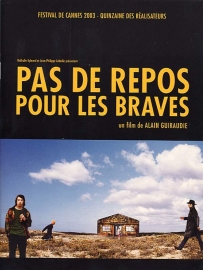 No Rest for the Brave

First of all there is Basile Matin, a young boy who dreamt of Fafatao-Laoupo, symbol of the penultimate sleep...Now he knows that he will die if he ever falls asleep again in his life. The problem is, that at his age you still like to think that you have your life before you. And then there is Igor, another type altogether. He works a little and studies almost not at all... But he doesn't have any money and he's bored. That is why Basile's story is terribly interesting to him, even if he doesn't really understand it. Finally there is also Johnny Got. A little bit of a free-lance journalist, a little bit of a detective, pretty much a dare-devil and someone who likes to stick his nose in things that don't concern him.

Basile's case in particular interests him so much he'll go looking for him.