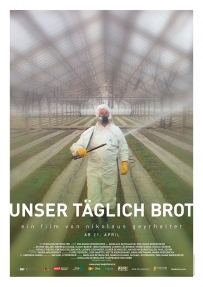 Welcome to the world of industrial food production and high-tech farming! To the rhythm of conveyor belts and immense machines, the film looks without commenting into the places where food is produced in Europe: monumental spaces, surreal landscapes and bizarre sounds - a cool, industrial environment which leaves little space for individualism. People, animals, crops and machines play a supporting role in the logistics of this system which provides our society's standard of living.

OUR DAILY BREAD is a wide-screen tableau of a feast which isn't always easy to digest - and in which we all take part. A pure, meticulous and high-end film experience that enables the audience to form their own ideas.