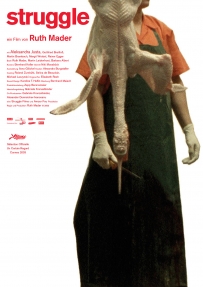 Struggle is set in contemporary Austria close to the border between East and West and hence between wealth and poverty. Ewa, a young Polish woman, hustles from one job to the next - picking strawberries, working in a poultry slaughterhouse, scrubbing the swimming pools of the rich. Her existence is stripped to the level of subsistence and driven by the hope of finding better prospects for her and her little daughter.

In the second part of the film, a recently divorced Viennese real estate agent begins haunting swingers' bars, hoping to fill the emptiness that reverberates through his new life. He does not have Ewa's financial anxiety, but he wrestles with a failed marriage and painful alienation from his daughter.

Both Ewa and Marold are physically vulnerable - Ewa due to her precarious ability to provide for her material needs, Marold because his stultifying isolation drives him to exploit his body in order to feel. When they meet, their desperation carries them to even greater extremes.