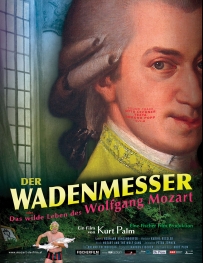 In his portrait THE MEASURING OF THE CALVES, OR THE WILD LIFE OF WOLFGANG MOZART, Palm approaches Wolfgang "Amadeus" Mozart in an extremely unusual way. In addition to music Mozart's life revolved around by movement and travel, and so Palm takes his audience into the air, across the countryside and under water on two routes often used by Mozart with his family and later his wife: from his birthplace, Salzburg, to the city where he died, Vienna.