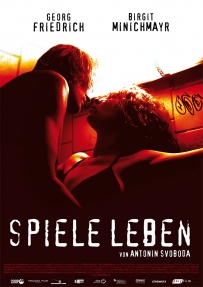 You Bet Your Life

Kurt, in his mid 30s, is a compulsive systematic gambler with neither luck nor discipline. His main occupation is scraping together all the cash he can. He then loses it, gets into debt, borrows more, loses it again and so on. Everyday life for Kurt, whose gambling relapses have soured his relationship with his long-term girlfriend Manu.

One day Kurt "stumbles" across the possibility of letting a die make a decision in a game. He is inspired by a lucky chance as well as by a TV program on Mozart's "Dice Symphony," a musical curiosity in which every possible variation ends up having the same harmony. From now on Kurt's life will be determined by the irresistible pull of chance. Indeed, he starts developing a mania for letting the die make his everyday decisions. He thinks he's found a new, personal system not only for gambling, but for life as well. With a roll of the die, he chooses one of six job off ers and appears to be on his way back into society. But appearances can deceive: the arbitrariness of the die is far too dominant, and Kurt is too compulsive in his search for personal happiness. Manu can only go so far in helping Kurt, who's become too unreliable for her, and whose downfall is imminent and inevitable. Kurt now seems weightless as he drifts from one decision made by chance into another, squanders his money and meets Tanja, a drug addict who could become his new girlfriend - selected by the die.